New Bomb Turks are one of the wildest rock&roll bands out of the 90s. Almost 25 years after their kickin' ass debut album “Destroy – Oh – Boy!” they're still alive and on fire. Frontman Eric Davidson also wrote a book about the underground punk rock scene between late 80s and early 2000s: it's called “We Never Learn – The Gunk Punk Undergut, 1988 – 2001” and it's a must read for all the punk rawk&roll lovers. We can't wait to see New Bomb Turks on Punk Rock Raduno's stage. Here we go with a fast and furious Q&A with Mr. Davidson. ​ 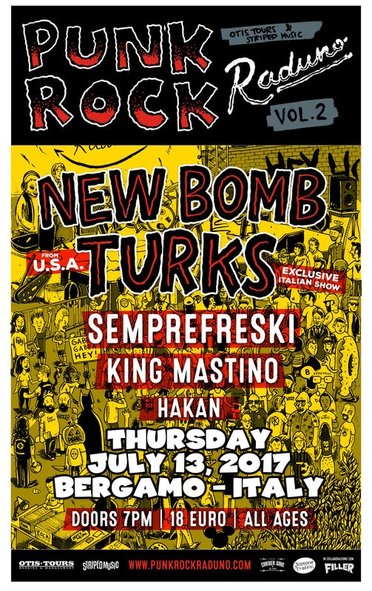 In your book “We Never Learn” you mention Union Carbide Productions and Nation of Ulysses as “Bands I Could’ve Maybe Seen But Never Did”. Which is number 3 on that personal list?

I was just thinking about that the other day. Honestly, I saw all the favorite bands I could have actually been able to see so far. I missed out on catching Kurt Vile and the Violators, which I would have liked to see. Kurt Vile still plays around New York, but from what I hear it's a little jammy, not as cutting as the old band was.

How did you end up writing “We Never Learn”? Was that your own idea or someone told you “It would be awesome reading a book about the 90s r’n’r scene”?

I had an idea to try to write something longer after years of doing music writing in local magazines and websites. And I knew Mike Edison (Raunch Hands, Pleasure Fuckers, and other fine sleazy trash acts), and he worked for Hal Leonard/Backbeat Books. I threw a few book ideas at him, and he said a history of 90s garage punk was probably the best idea for me, as it'd be my first book, and I really lived through all that, and would have good contacts. I guess he thought a fiction book about the ghost of Johnnie Ray haunting Morrissey and eventually becoming an icon of gay punk in some other dimension probably wasn't the best idea for my first book.

How long did it take to write the entire book and was it hard to find a publisher interested in that kind of story?

Well Edison was a great connection, he edited the book, so that part wasn't too hard. I did have to kind of wrap the idea up with it all leading to the "neo-garage trend" of the early 2000s (Whte Stripes, Hives, Strokes…), as those bands actually sold records, and the publisher could kind of use that as a hook. It took about 2 years to finish the book. I interviewed like 60 bands or something.

Could you please explain the meaning of “gunk punk" to people who haven’t read your book yet? And they should asap!

Edison said I'd need a subtitle, so people get an idea of what the book is about. And just naming it “We Never Learn 1990s Punk”, well lots of people still think of mohawks and studs as “punk”, know what I mean? Or the might think it's about Green Day, Offspring, that kind of crap. So I just came up with “The Gunk Punk Undergut” because I like the rhyme of it, and it kind of says it's a dirty, underground kind of punk. Then Edison suggested that I sprinkle the term throughout just to have a kind of connecting idea. I honestly wasn't trying to create some new “genre designation”. Just thought it was a fun, catch-all term. 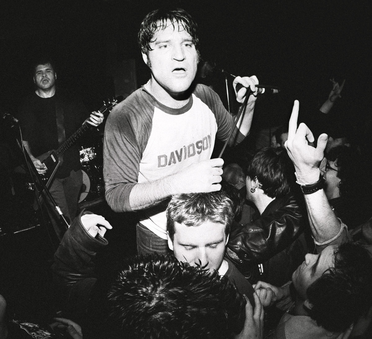 So, what's your definition of punk rock?

Oh, everyone is tired of that question. But if I have to: The Saints.

Is there any good 90s band that you forgot to write about in “We Never Learn”?

I will still come across hear of bands that I am like, "Holy shit, that's from 1997? How did I never hear that?!" The Lost Sons of Krypton and the Nevermores are just two examples. But not too many. I think I did a pretty good job. You don't want to start going out even further with more bands, because I think I have a pretty wide range of bands in the book already. And pretty soon it would've just been a catalog of all garage bands from that decade. I wanted to present a certain vision from my perspective, and I hope I kind of laid out early in the book that this is from my vantage point and experience. I don't know every single band that ever played rock'n'roll. Ha!

Do you know any Italian punk rock/rock&roll band from the 90s?

Two Bo's Maniacs!! And I like Snookys, though they are not from the '90s. I am sure there are many I am forgetting or haven't heard!!

Which is your favorite record label from that era?

Oh, come on. CRYPT RECORDS! No explanation necessary. But In the Red and Sympathy are big favorites too.

Which are your favorite r’n’r books? Top 3, please.

There are many, but...
Psychotic Reactions and Carburator Dung - Lester Bangs
Please Kill Me - Legs McNeil & Gillian McCain
Our Band Could Be Your Life - Michael Azzerad

And your favorite fanzines too, please.

Fungus On the Foot, The Offense, Superdope.

Impossible. But but "Motherfucker" and "Every Night is Saturday Night" spring to mind.

Again, too many, but "Jackalope Eye" or "I Say Fuck," or "Coattail Rider."

Ohio is famous for a lot of punk bands from the past (from Pagans, Dead Boys, Cramps, Devo to New Bomb Turks...), is there any young band to watch out nowadays?

Well I don't live there anymore, the other Turks would know more. But I just saw this band Dana last night that was alright. Archie & the Bunkers are fun. The Ipps… there are a bunch!

If you should explain/describe New Bomb Turks’ music to someone who never heard of you, what would you tell him/her?

Oh sheez, that's never a good road to go down. Just high-energy gooftastica trash rock'n'roll. Something like that? Not as good as DMZ.

In your opinion, which is NBT's best record?

We always seem to say “Destroy-Oh-Boy” and “Nightmare Scenario”. You can have your own favorite.

Ah, who knows. We knock around the idea of a single or something. It's hard with me in NYC, everyone's jobs, families, etc. But who knows...

What do you expect from Punk Rock Raduno. Is there any band playing at the festival that you'd like to catch live?

I expect to have a blast!! I believe Nikki Corvette is playing, hope to see her. Pals with her, love her music, but never got to see her live.